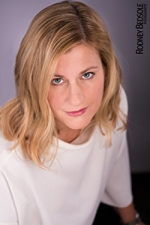 Emmy-award-winning writer Amy Bass was born and raised in New England, the daughter of two noted local journalists, in a house filled with books and a yard filled with an enormous vegetable garden, berry patches, a small orchard, and about thirty acres of woods going straight up a mountain. Now a New Yorker, she makes sure that the Red Sox, the Berkshire Hills, and Cape Cod's beaches and bike paths remain big pieces of her heart.

For school, Bass went to Bates College in Lewiston, Maine, where her fourth book, ONE GOAL, is set. She received a Ph.D. with distinction from Stony Brook University, and has had a fruitful career as a professor and scholar of sport, culture, and politics.

In addition to her academic work, she's been seen on the TODAY SHOW, can be heard on NPR, including The Takeaway and Midday, and CBS Radio, and has been featured in the Boston Globe. She's written about sport and politics for Slate, Salon, the Allrounder, and CNN Opinion. She hosts a weekly radio show, Conversations with Amy Bass, on WVOX. In television, she served as senior research supervisor for NBC Olympic Sports across eight Olympic Games, winning her Emmy for her work at the London Olympics in 2012.

Registration for this event has now closed.